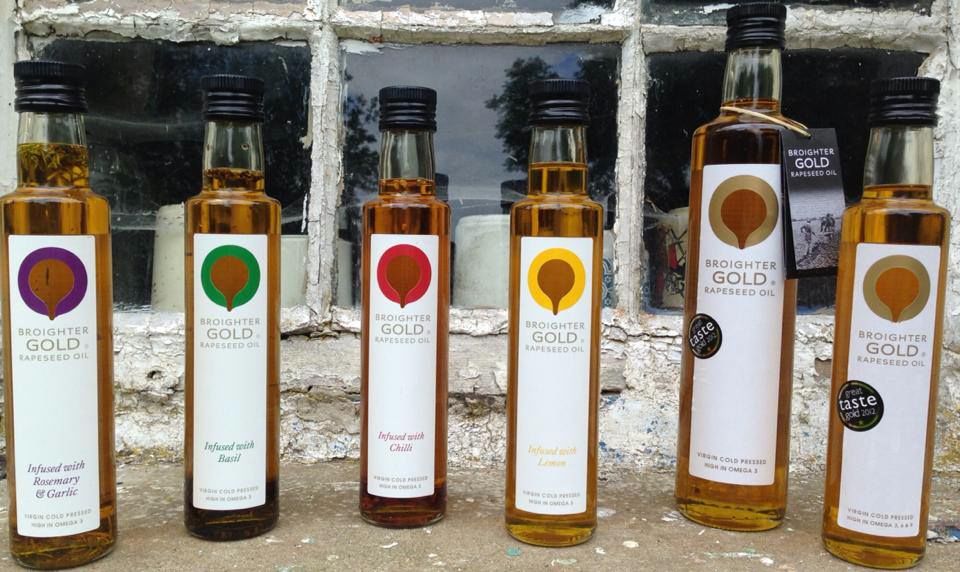 Next to feature in our new blog ‘Made In Warke’s Deli’ is a company who have built up a fantastic reputation in Northern Ireland – Broighter Gold Rapeseed Oil.

Some of the world’s greatest discoveries and inventions have been made quite by accident.

Everything from penicillin to Goodyear tyres!

And so it is with Broighter Gold Rapeseed Oil. One evening in 2006 Richard and Leona Kane were preparing tea when they realised they had run out of olive oil. Richard brought up some unfiltered cold pressed rapeseed oil which Leona used to cook their steaks and dress their salad.

“It was the smell of the rapeseed oil, was the first thing that caught Leona’s attention, and the way the steaks didn’t burn in the pan, the taste wasn’t bitter, with no aftertaste like olive oil, and we joked that it was our “Broighter Gold,” said Richard.

Leona set the ball rolling with Broighter Gold Rapeseed Oil. Excited about the health benefits of the oil for cooking, frying, making dressings, she realised that it’s a perfect all rounder. She decided to diversify the natural product of cold pressing rapeseed oil into a premium cooking oil.

At Wark’e Deli we love the story behind Broighter Gold but we love the product even more. It has rightly generated a very enthusiastic following with top chefs like Noel McMeel, James Martin, Simon Rimmer and Rachel Allen all fans of Broighter Gold.

It was also served to world leaders at the G8 Summit in Fermanagh, the Irish President and President Obama have also enjoyed it as has Her Majesty the Queen when she visited the Titanic Centre in Belfast.

We love the Kane family’s connection to the land in the Limavady area and to the traditional methods of farming this land.

Richard is the sixth generation of Kane farmers and while he has embraced the latest machinery he has remained true to the traditional and time-honoured ways of farming the land.

At Wark’e Deli we love this appreciation of doing things the right way without cutting corners. It is what we strive to do everyday, whether it’s in the form of serving a great plate of food or finding new suppliers and products to showcase to our loyal customers.

For the love of jam!